The starting month to my new year...

I have a large trench dug through my back yard. But its ok, it means we can do normal things like flush the toilet and take showers. Some of you may have read my post from Jan 1st, about the septic issue... well, pumping the septic tank only helped for a day or so, then everything went right back to the way it was.

We knew from the guys that pumped the tank that the tank itself was in good shape. We knew it wasn't sludge build up in the tank, as we just had it pumped. We had been told the drain field line was working from what they could tell, as they could see water flowing back into the tank from the drain lines, which they said was normal.

So we researched. Groundwater build up?? Maybe. We spent a couple days digging a "one shovel head" deep trench from the back of the property to the side yard area that stays so wet, and were delighted when it slowly started to dry up that small area, moving the water to the back where it absorbed right into the ground. But that didn't help at all with the plumbing issue, which was getting worse- we could flush one toilet one time a day. That was it. If we flushed more than that or put any other water down a drain, it ended up either filling the other toilet or in the bathtub. Not a clog. So hubby was showering etc. at work. Which left daughter and I to be creative.

I washed dishes in the 2 large mixing bowls, one for wash, one for rinse, and emptied them into a bucket, then emptied that outside, across the driveway into the woods. No shower, just bucket baths. Old hay and a muck tub for the other deed, then buried that. For 2 weeks... this was getting old old old.

Side yard still wasn't really draining out, always seemed to be wet even though there was a constant stream down the little trench we had made. During the 2 weeks, every time I started looking into possible solution's, drain field failure came up. But the guys that pumped the septic had said the drain lines were OK. We decided we needed a second opinion, and started calling places again. I found out on the third call that we needed a permit for anyone to do anything other than look, so I called the  county permit place, which is the health department, and BINGO seems like everything is going better sense then. The health department guy came out, looked around, gave me several numbers of local people to call that don't charge an arm and a leg- he looked a little pissed when I told him how much we payed for the plumber who poked the ground, and then to the company that pumped the septic tank. He asked me to let him know what the folks I call from the list think need to be done so he would know what permit I need.

So I called the first name on the list. The guy asked questions, then told me if we give him some patience he would be able to come out over the weekend to dig it up and see what the problem was. He quoted me a price on one possible solution, which was a heck of a lot lower than anything we had seen during research. So we gave him patience, and he came out Saturday evening, looked around, looked at the ground and where it was wet. He brought his tractor over on Sunday and dug a real trench (2 buckets deep) to get the groundwater gone- he took it across the yard to meet with the much smaller one we had dug, and then made ours bigger. While digging that trench he found what was supposed to be the drain line- the hose was crumpled and filled with rock/root/dirt. He also found the distributor box, but there was so much water everywhere that was really all he could do until the water went down a bit. They watched the water level for a bit, then had us flush both toilets- we did, and the tub started filling. So they started digging to the septic tank lid, and water suddenly gushed up everywhere- the tank had been so full that the pipes leading into the house were also full, and when the pressure shifted, the water lines to the house emptied. Im glad we had the tank pumped on the 1st- it would have been so much more disgusting had it not been. So now we are playing the waiting game again, The distributor box should have water moving through it, but it doesn't. The drain line they found should have been in much better condition as it was installed in 2002, but it wasn't. They haven't found the other drain lines, there should be more than one. 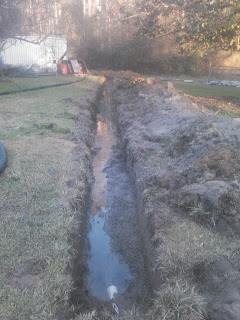 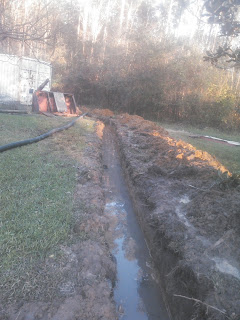 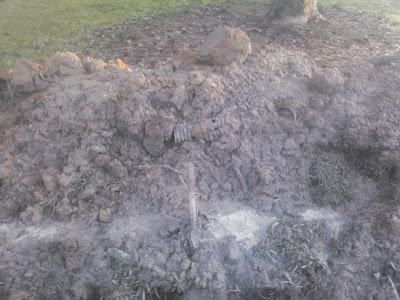 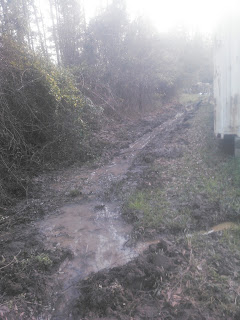 It has been 3 days, the drain pipe has a bare trickle of water coming out, the ground in the side yard is actually for the first time sense we have been here (mid Nov) dry enough to walk across without stepping in a  grassy water puddle, but the septic tank (they left the lid up a bit) keeps re-filling overnight. We do not know where the excess water is coming from. But I have been able to shower and flush toilets and run the dishwasher at will for the last 3 days, so that is an improvement.

I strongly suspect that the excess water that keeps re-filling the tank is coming from the other drain lines. I suspect that the other 2 areas that have been wet sense we have been here are where the other drain lines are at and that they are in just as bad shape as the one that they found was in. I suspect that it is going to take longer for the area to dry up than what any of us think it will, especially with the rain we are about to get on Friday. But that's OK. This guy intends to find the problem and fix it, before he is done. So long as we can give him patience. Which I have tons of. The price he quoted was in case he had to put in a new drain field line, which is what it sounded like to him. It looks like the distributor box isn't working, and that they may need to repair the line running from septic tank to the distributor box, or at the very least unclog it. I do not know how much these things are going to add to what he quoted, I hope not to much as we are out of money.

Turned out the previous homeowner installed their own drain field line, possibly without a permit- the health dept doesn't have one on record. But they had a friend with a backhoe... Hubby is looking into the legalities of that.

On to other things, right? So my horses are doing great, we still haven't gotten the other pasture complete, what with hand washing and bucket lugging and trench digging going on. But they are feeling frisky, and oh my gosh, look right on the other side of this fence, there is some grass still growing! One morning as I am making an attempt at putting more t-posts in place, a weird reflection catches my eye... somehow a horse or two (no names mentioned) CRUMPLED 2 sections of fence. Not far enough over that they could get out of the pasture, but the grass that was trying to grow on the outside of the pasture was decidedly shorter than the grass around it, in two arch like shapes..... so instead of putting in more t-posts for the new pasture, I un-bent fence, added 2 more t-posts, pulled out the 2 that were in the area of crumple with the intention of re-positioning them.. THEY BENT THE T-POSTS. So now that little section of fence has 4 new t-posts holing it in place. And the fence is only a little bent. 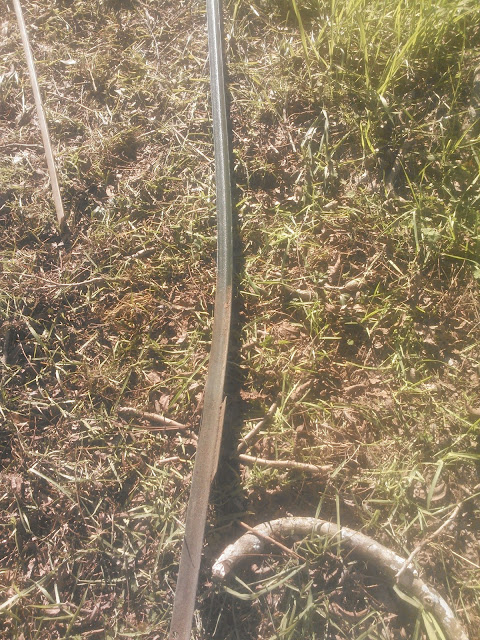 I really hope that the rest of this year goes better.
Posted by Tarnished Leaf at 8:37 PM