When we brought the girls down from Virginia Beach, we also brought down 5 or 6 bales of orchard hay, with the intention of transitioning them over to the local hay- coastal bermuda. Shortly after their arrival I had the new vet come look them over, and take a look at Sierra's skin condition so she knew what was going on with her. While the vet was here, she told me not to give them straight coastal bermuda, that I should either mix it 50/50 with something else or not give it at all, as it causes impaction colic. She launched into why it causes it, those of you that know me will understand when I say all I remember was that something inside the hay that starts with an "L" (or has an L in it) doesn't digest well, and can easily start a blockage.

So- when we went back to Virginia Beach to get the rest of our stuff from a super awesome friend that was holding it for us, we also picked up about 36 bales of orchard hay to mix with the bermuda.
Everything started out ok- I noticed that the girls only really ate a few bales of the bermuda, they left a lot on the ground to rot. So I started mixing it all in hay nets- 2 nets in the morning, and 4 nets at night. Same thing- they would pick out almost every bit of orchard and leave the bermuda in the nets. I decreased the amount of hay, thinking they would eat it then- didn't work, instead Litta lost weight and Sierra got cranky(er).

I went back up to the original amount.


In the meantime, I was unprepared for the humidity down here- humid even in winter, and the good orchard hay started to get damp- and a fine white powder on the edges! So I rushed out and bought a huge barrel fan left over from the summer months that one of the Tractor Supply's "local" to us had in the warehouse. (Local being within an hour drive.) The fan has been running almost non-stop sense then. It is doing its job- the hay is rarely damp anymore, and no more powder has formed. I've been pulling the exposed parts of the bales that got powdery off and tossing it in the compost sense it formed.
But the humidity did its job to well before I noticed, and as I got towards the bottom of the last pallet of orchard, the girls stopped eating more than nibbles of that too. 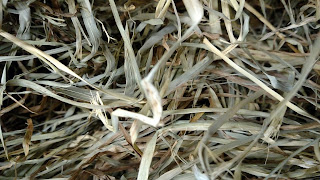 Over Dec and Jan I bought bermuda hay from every local place I could find- and only a handful or so of bales were edible according to the girls. dust, dirt, mold, age, fish smell (fertilizer), whatever, they were not having any of it.

I tried peanut hay- the center of the bales were good, but the exposed edges were not. And peanut hay is comparable to alfalfa- Litta does not need that.

So here I am in the middle of this weird strange winter we are having- the mares have turned the majority of the front pasture into dirt/mud, and the first pasture didn't really have much growing in it to begin with, most of that died with the winter cold. My last 5 or 6 bales of orchard are going bad. The local hay is junk. My girls are not happy.

Today we rented a van, drove 4 1/2 hours one way to a place called Cherokee Feed and Seed. Tonight I was able to give the girls good (GREEN!) orchard with no bad smells. They are Happy. I am not going to waste any more money on bermuda hay- obviously there is something wrong with it, at least, every place I could find to buy from this late into winter. We bought enough of this beautiful green orchard to last until spring grass comes in (I HOPE!) and will keep the barrel fan on it full time. Or at least when the humidity is high.

By the time we got back home, it was dark and sprinkling, so the new orchard is going to stay on the truck overnight, except one bale that I broke open to give the girls. 4 nets filled, about 1/2 bale gone. Yay :)

When I opened the door to get the one bale out, the smell that greeted me was so amazing, it smelled like an old hayloft in mid summer. I wish I could bottle that scent and sell it to horse owners everywhere. I am planning to get all our hay from Cherokee for next winter.

Posted by Tarnished Leaf at 8:01 PM