We have chickens on the brain. After I talked my hubby into baby chicks sometime in early to mid April, I've been dreaming of the day I get to eat fresh, free range, organic eggs from my own backyard. The chicks have grown.


I moved them outside in a temporary small coop they go into every night though generally not willingly, they are under fig trees and would much rather sleep in those. They have been outside completely sense mid May, and I feel so bad every evening when I lock them into their little coop because they have grown so much. In mid May it was perfect, and in just 3 weeks or so they have grown to the point that it is really to small, so I've been pushing their old small cage from when they were inside up against it- door to door so they have a tiny bit more room.

In the meantime we are finally making great progress with the last old coop that came with the property. I removed all the old siding, stripped out all the old rotted poop covered stuff that was inside it, found 3 eggs that are maybe 2 years old which I'm still deciding what to do with... :) 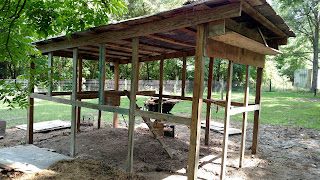 Hubby picked up wood to make a floor and new walls, and I scavenged a window..... which I broke yesterday morning. Over the past week we have gotten the floor frame in, I hung joist hangers and painted the wood for the walls red. I was going to cut the joists yesterday and get that part done until the broken window. I searched craigslist for an old window we could use, but I was also trying to figure a way to do this without spending money. No luck on craigslist, but by that time I was already sketching out a shutter idea that would use sliding tracks instead of hinges.

I went straight to the workshop and built them, using pallet wood. New shutters with an old barn-wood look- Free! :) They should fit a convenient opening between existing studs in the coop, and it will be closed every night until we can find screen or Plexiglas or something to fit into a 27 X 28 opening. 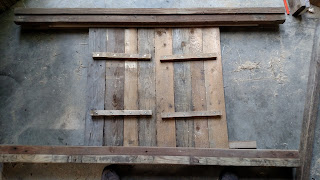 Our plan today is to get it finished. The whole coop. And move the chickens into it tonight. I have a feeling it will be tomorrow before we are done, I have re-learned one thing sense been back out in the middle of nowhere- everything takes longer than what you planned.


It is the end of today, and we still have quite a bit of work left to do. We did get a lot done though, 3 walls up, floor in place, roosts up. Tomorrow we plan to remove the extra bit up front including the excess roof, leaving just enough for a decent overhang. planning to save the framework, shorten it and move it back, then attach it to the new front. Install the shutters, Build and install a dutch door (chickens get the bottom part) start framework for the nest boxes, but they wont be put in place yet- and install the pvc pipe feeder and waterer... and a ramp to the door, and a chicken ramp to the roosts... I think thats it! We will see what gets done!
Posted by Tarnished Leaf at 8:36 PM