I can't believe I didn't post a blog in over a month! So.. let me think. Ok, the septic is still not fixed, but still usable- our septic guy was pretty sick for a while (think hospital) and while he is better and back on the job, it seems to rain at least once a week, and he needs the ground water to be mostly gone. So we wait more, but hopefully this month it will be completed, buried, and I can have a usable side yard again instead of a ditch. 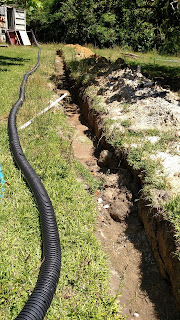 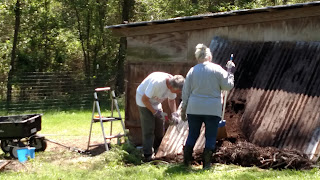 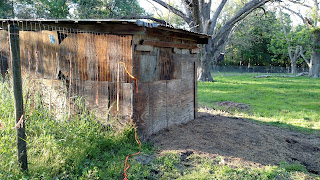 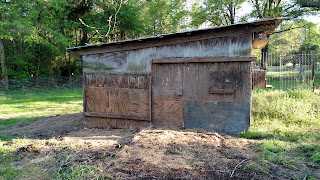 Both side areas gone, and thanks to all the hard work they did I was able to move forward with removing the last of the old fence, which was in pretty good condition so its rolled and under the carport for future use.

While they were tackling the coop, I was spraying the pasture for dog-fennel. In case any of you were ever wondering, dog-fennel is absolutely one of the scrappiest plants in the world. Drop a tiny piece? no problem, it will root itself and flourish. Miss a little root fragment while pulling it out? No worries, it will develop an entire new system and engulf the area. I had pulled out a lot of it while I planted pasture seed in the front half of the first pasture. Then I noticed that the middle section of the second pasture was almost 100% dog-fennel. So I researched and got some pasture pro from Tractor Supply. I sprayed and sprayed. Most of what I sprayed died. but it is scrappy, and some of what I sprayed wilted for a few days, and then came bouncing back to health. And some of it I missed. So I still have dog-fennel. The Battle Continues...

We now have chickens! Hubby finally agreed, so I went right to Tractor Supply and got 7, 5 from the pullet bin and 2 from the straight run bin. I was so happy to be getting chicks that I forgot to see what kind I was getting! I called the next day, and what I got was 3 leghorns, 2 ASI's, and the 2 straight runs were black specials. My thought process went "leghorns =  white + free range + chicken hawk = no leghorns" which would mean I had 2 pullets and possibly 2 roosters (which really meant 2 pullets and 1 rooster) So I went back to Tractor Supply almost a week later and picked up 6 more chicks! That time I got 3 Rhode Island Reds, 2 ASI's, and 1 Black Special. The reds and the black are straight run, the ASI are pullets. So Im at Pullets= 7, Straight Run = 6. But then one of the first special blacks died. So now, 12 chicks, 7 pullets, 6 straight run. At the time I thought straight run was about a 50/50 mix of hens/roosters, but I have found out that its more like 25/75.

So now we are re-looking at the old coops we took out of the pastures that I have not yet taken apart to modify one as a temporary place for them to stay along the fence line so that the horses (Sierra mostly) have time to adjust to them. We want to get that set up in the next week, and Ill bring them back in at night till they are a little older, then we will move them into their permanent coop. Hubby is going to make nesting boxes and I have decided to go with a cleaner water system (Chickens poop A LOT) so we are going to get chicken nipples, pvc, and a bucket with lid to make it. And we are going to make another thing with pvc to feed them out of, something they hopefully wont poop in.

What else.. Ahh- Hubby found a few pallets for free, so I've been pulling those apart. We are going to build compost bins with them and some of the old wood from the coops I took apart. I've been sick too, about 2 weeks now. Which means I have fallen pretty far behind with the pasture manure. But- I am very happy to report that almost all the seed I planted is now grass! 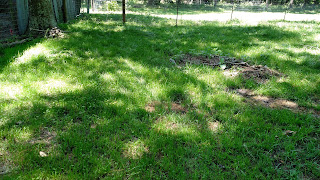 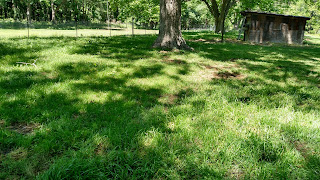 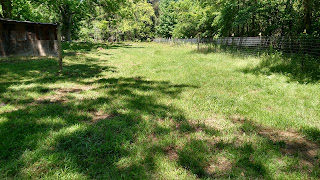 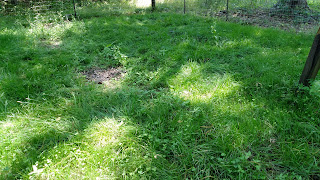 The mares seem to be eating it, in winding paths. I did not get all the pasture re-seeded though. Just the front 2/3rds of the first pasture. We are planning to tackle the middle part of the second pasture this weekend- most of the dog-fennel is dead along with other weeds that were growing in there. So I'm going to rake and hubby is going to spread the seed. If it isn't actively raining I will water it down. No old hay left to spread out though so hopefully it will be OK.

The Garden! OK, I forgot about the garden! So- despite my huge ambition to get 8 or 9 beds planted this year, reality settled on 2. Anyone remember the post I made- Lasagna Anyone?  Welllll. I may have done something wrong, or perhaps there wasn't enough time for the beds to decompose... but I had to go old school :(
Bed one is doing wonderful,, everything planted in it is growing well, no damage, no wilting, good strong plants! Bed two is doing horrible! Everything planted in it is dying, wilted, and buggy! (Except the Basil!!) There is about 4ft separating them, and the tomato plants in both beds were treated exactly the same from seed to transplant! The only difference was the bed! The difference in the beds???? Just this: Bed one was about 1/2 hand dug (ok, shovel dug, not hand) until I realized that doing this as an adult is for some reason an awful lot more work than doing it as a kid. We went and bought a tiller (Tractor Supply again). So bed one the tomato half was hand dug, and then the entire length was tilled about 3 times. Bed 2 was tilled twice. That is the only difference!!! Lesson learned! Hard work is the way to go!


Future beds will be Hand Dug, then Tilled three times!! My back will limit the additional beds to maybe 2 a year... LOL.

Posted by Tarnished Leaf at 2:51 PM