It is close enough to being finished that Im putting the chickens in it tonight!!!

On Sunday we changed plans... Hubby went to pick up a blade for the circular saw that would go through metal, but the hardware store didnt have one that would fit our saw, and ordering one was pretty pricey. So instead he brought home enough 2x4's to build in a new front frame. Which he did while I worked on building a dutch door and roost walk ways.
We got the frame installed, and it was one of those days in which everything goes wrong and takes longer than it should. We tried to attach the shutters, but the screws were not long enough to go through the 2x4 frame, the 1/2 inch siding, the 1 inch brace piece, and go into the shutter itself, so we couldnt get them up.


We have had a heat wave down here most of this week- real feel has been between 100 and 110 so I have been taking it a bit slower than I like. On Monday and Tuesday I got some of the gaps filled between the wall studs and the siding, installed the pvc feeders, measured and cut the main siding for the front wall. 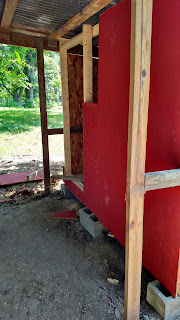 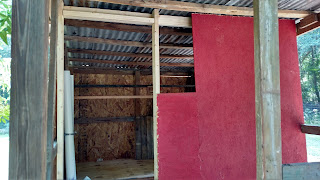 Yesterday I finished filling in the front wall, added another stud to the frame towards the top, installed the roost walks, put in the door, which was a pain in the butt and I ended up having to sand down the threshold and the top of the lower half of the door. 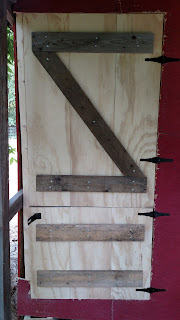 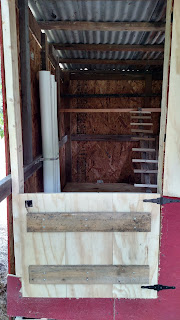 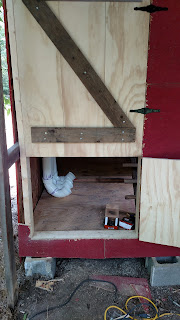 And finally, this morning I finished installing the shutters and the door hardware. 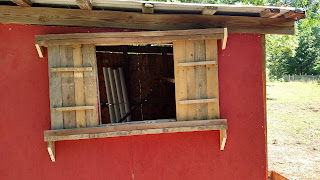 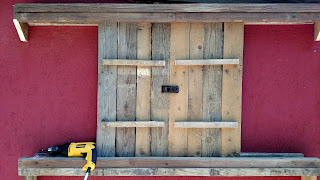 There are small things left to do, gaps inside between the floor and the walls, pieces of finishing trim we may or may not decide to add, cutting and framing in a door to remove and clean poop boards, putting in the poop boards after I see where most of the poop ends up, little things like that.. and one big thing, which will be removing the extra space in the front after we get something to cut through metal... but as far as being able to move the chickens to their new coop and out of the little cramped one- Done!