On August 23rd I woke up to see a huge pecan branch down in the pasture. The horses were spooked but OK, and the chickens could care less.


I was off work a few days later and tried to get the chainsaw to do anything other than laugh at me, but failed. So I decided to take out my frustration on the lawn... an hour into that I killed the mower. It would start briefly, then die. I gave it a final try, then gave up with the lawn partially cut, the tree still in the pasture, and an occasional chuckle from the chainsaw.


I worked the next three days. I also did a little troubleshooting on the mower- and checked a few things. The gas gauge is broken"ish". When full, it reads full, but when empty it reads 1/2 full. I must have broken it when I mowed through the back end of the pasture- a lot of tall weeds and brush, something must have jammed it. The gas can was, of course, empty. I filled it my next day off, and then discovered that my last final attempt to start it in frustration, I left the key turned on to "lights"... So I also killed the battery. I hunted down the charger, and it was also (of course) dead. plugged that in, came back a few hours later, hooked it up to the lawnmower battery, came back a few hours later, started it up, got the lawn finished, the gauge can stay broken now that we know. The chainsaw is still laughing at me.

Today I tackled the fallen branch with a hand saw and trimmers. I thought I would bring all the small branches I cut off up to the burn pile, but in the process decided I am going to just make a few huge burn piles in the pasture, and burn them when they dry out a little more.

I called it quits for now when my ever loyal assistant wore herself out chasing nothings, and started giving me the most pathetic looks. 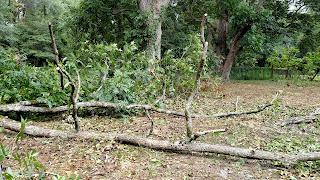 It is my hope that my hubby will fire up the chainsaw this weekend and cut the big parts of the branches into manageable pieces that I can move on my next days off.

Other new things- We lost our rooster to the new neighbors dog, they came and let us know and apologized, nice people. The leghorns have started laying, I found three white eggs this morning, and saw one of the leghorns heading into the nesting boxes when I left the pasture. Hopefully the Isa Browns and the Rhode Island Reds start laying soon.
So far, So Good on Sierras ongoing skin problems- this year she hasn't had anything of note pop up, just minor stuff that I cover with blue wound-kote. Her eye has gotten a bit inflamed a few times, each time I put in her eye meds and put on her fly mask, and within a day or so its normal again.
Posted by Tarnished Leaf at 11:50 AM